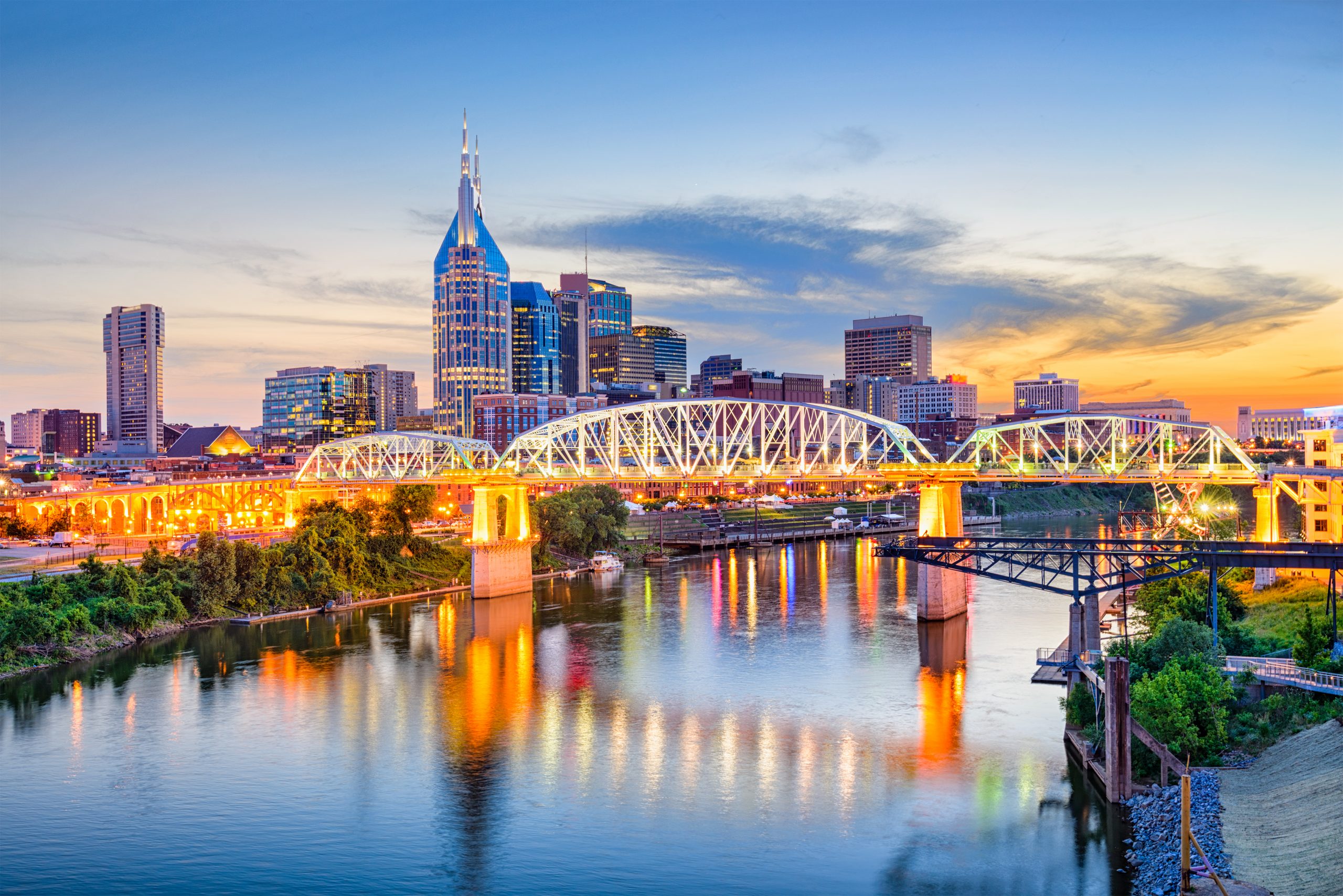 August 11, 2022 – Carlsbad, CA – Red Dot Digital Media, a leading specialty integrator in the digital signage space, is collaborating with Ryman Hospitality to integrate compelling AV content into the guest experiences at several Ryman-operated entertainment venues in the Nashville area. A featured element of the project includes an interactive guest book at Ryman Auditorium – former home of the Grand Ole Opry – as well as digital signage content in various restaurants and retail establishments.

Not long after celebrating the Ryman Auditorium’s 125th anniversary in 2017, Ryman Hospitality embarked on a multi-year mission to update the facility with digital signage to modernize the guest experience. Red Dot Digital Media was engaged as a specialty integrator to develop and support content for the Ryman Auditorium, as well as a host of other properties in the greater Nashville area operated by Ryman Hospitality. In total, Red Dot now supports more than 65 screens in the Ryman Auditorium box office, lobby, concessions and retail shops, as well as various attractions throughout the greater Nashville area.

“Red Dot is privileged to update and maintain key elements of the digital signage infrastructure within the Ryman Auditorium and other Nashville landmarks,” said Darryl Kuder, President of Red Dot Digital Media. “Each year, millions of country music fans make the pilgrimage to Nashville to take in the sights and experience all the city has to offer, and we’re proud to play a role in helping to create those unforgettable experiences.” 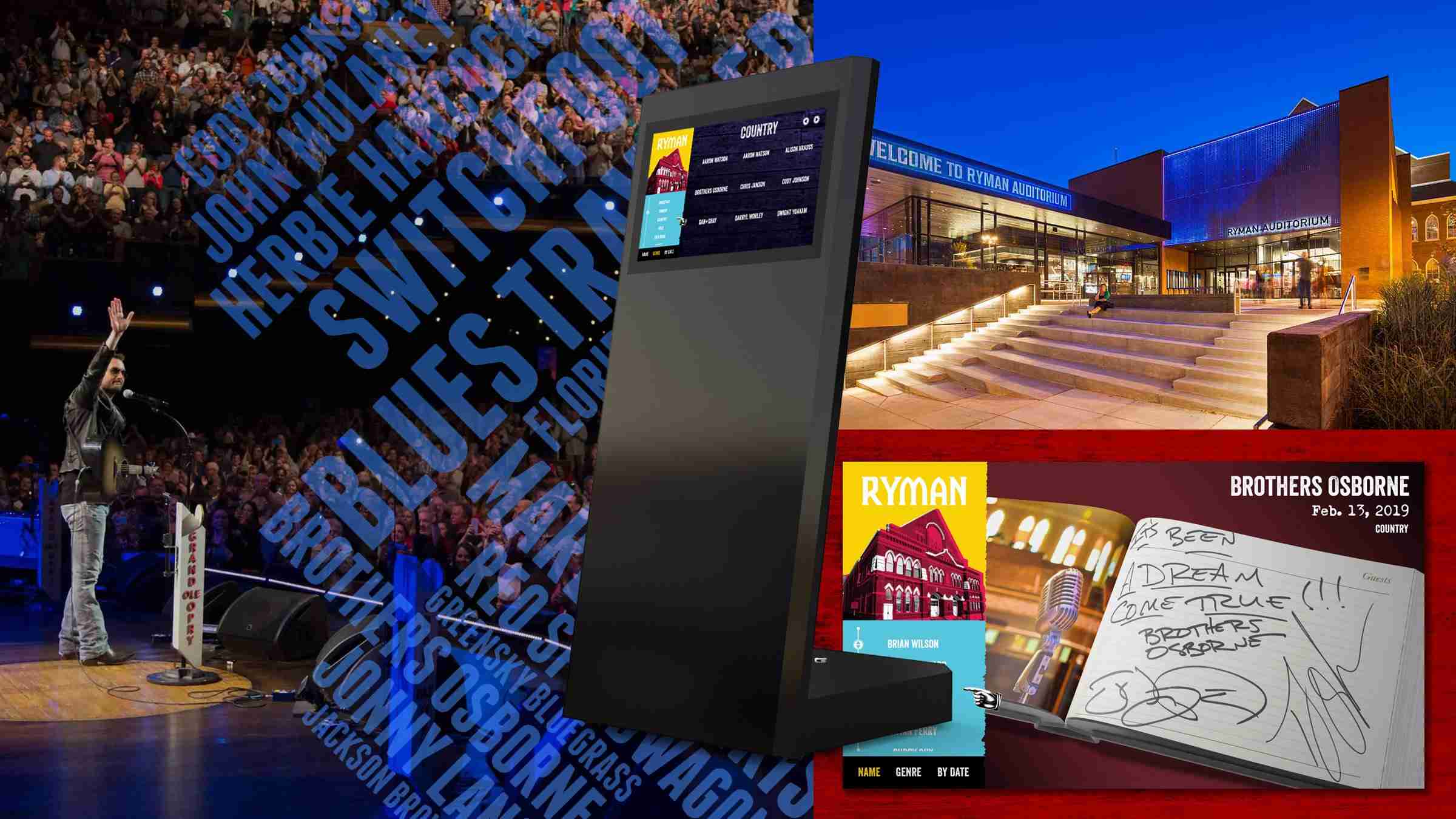 Performers at Ryman Auditorium follow a time-honored tradition of signing a guest book before they take the stage. Red Dot was tasked with modernizing how these messages are archived to make them more accessible to visitors to the auditorium, deploying a beautiful Palmer Digital Group 22-inch touch-interactive kiosk powered by a BrightSign media player to offer visitors the opportunity to browse past performers and find signatures of their favorite musicians. Ryman Auditorium’s full library of guest books was scanned and loaded into the cloud-based library of past signatures, making it possible for visitors to search an extensive database of recent performers, as well as musicians who performed many years ago. The kiosk is a time capsule of sorts, preserving notes and signatures in the performers’ own handwriting in perpetuity.

Red Dot was tasked with deploying and supporting digital menu boards in restaurants located on both the upper and lower-level concession stands of the Ryman Auditorium, including the popular Cafe Lula at the Ryman. Content management was streamlined to automatically populate the appropriate menu items depending on the time of day, with the ability to easily switch to alternative content sources when food isn’t being served.

Even when performances aren’t taking place, Ryman Auditorium is still abuzz with visitor activity. Self-guided tours take place seven days a week. During the self-touring hours of 9am until 4pm, Ryman Hospitality utilizes dozens of digital displays located in the auditorium’s various food concession areas to display information about the facility and to promote upcoming events. This enables Ryman Hospitality to fully utilize the screens to keep visitors educated and entertained.

Ryman Hospitality operates a number of retail establishments in and around the Ryman Auditorium. The Ryman Shop is the main gift shop within the auditorium, while the Opry Shop is located adjacent to the auditorium on Opryland Drive. Both are high-traffic stores welcoming a steady flow of customers. Digital signage figures prominently in the design of both stores, with individual screens and 2×2 video walls featured behind the counter and in other high-visibility areas within the stores.